Being Memorial Day (tomorrow), the following story, written by my Son, Brad, tells about a scrape he got into in Iraq. Our troops are going through things like this daily and we should all take time to thank the Lord for them and the great job they are doing!

In April of 2004, along with my unit, the 1-7 CAV, I had been in Baghdad, Iraq for about a month. As the Squadron tank master gunner I had several responsibilities. One of these was to assist our unit’s Civil Affairs team with their missions in our Area of Operations (AO). On 28 April 2005, just after lunch, everyone involved in this afternoon’s patrol met at our HUMVEEs for an Operations Order. The senior officer, a Major, briefed us on the afternoon’s mission. His briefing included the locations we were going to visit, primary and alternate routes, actions on contact, and order of march for the vehicles. We were going to check on several civil projects going on in our area, the last one being a meeting with the contractor who was refurbishing an old Republican Guard headquarters building near Baghdad International Airport (BIAP). The building was being remodeled into a state of the art medical clinic for the citizens of the Al Furat neighborhood. 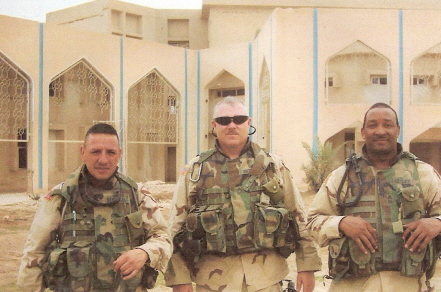 L to R: Sergeants Rodriguez, Bryan and Presley in front of the AL-Furat clinic.

Before arriving at the clinic we had checked on all of the locations that we had been briefed on and the patrol, up to this point, had been uneventful. We arrived at the Al-Furat clinic, our last stop, and set up local security. We, the major and senior NCOs, met with the contractor and his brother. Both of these men, US citizens, had been born in Iraq and had come back from Houston, Texas, my home town, to try and make some money rebuilding the country.

After the meeting we mounted up on the vehicles and moved out for our return trip to Forward Operating Base (FOB) Falcon. I told the driver to switch places with me because I wanted to drive back to the FOB. The clinic is located on the west side of Baghdad near BIAP and Camp Slayer. FOB Falcon is located on the south-central side of the city. With the afternoon traffic (even in Iraq), barring any civilian accidents, it is usually a 15-20 minute trip.

It only took about 2 minutes for us to reach Route Irish, our way back to FOB Falcon. We hadn’t been on Route Irish for more than a mile when I noticed something strange. In the median to our left was an Iraqi army patrol looking my way, along with an American patrol that they apparently were conducting joint operations with. The Americans were behind the Iraqis and looking in the other direction. The Iraqis were all holding their weapons, AK-47s, level and at the ready oriented towards the freeway and us!

Right before we reached their position we started hearing small arms fire and then all the Iraqis opened up in our direction with their AK’s. The sound of small arms fire was augmented by the sound of rounds splatting on to our vehicles! 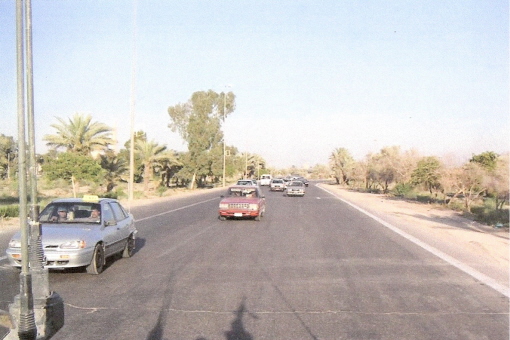 Typical afternoon traffic on Route Irish in Baghdad, but this scene, except for the shadow of a machine gun, could be mistaken for driving in Phoenix, Arizona.

We proceeded to speed our Humvees, about 65 mph, past the platoon of Iraqi soldiers all shooting their AK-47s at us, we thought. I’m thinking there is going to be hell to pay!

We quickly turned around and went back to the Iraqis’ position, ready for a fight. When we arrived there the American patrol leader on the ground was shouting colorful expletives at the Iraqi patrol leader.

It turned out the Iraq platoon had been engaged, drive by style, by a black sedan full of insurgents. When we passed their position they were returning fire on the insurgents, not engaging us. So, we had driven through the cross fire! Even if we had been rehearsing it, we couldn’t have timed it any better.

The vehicle that I was driving was hit twice in the hood and once in the windshield by rounds fired by the insurgents. One round passed through the soft top from behind the vehicle and struck the windshield frame about six inches above my head! That round was fired by one of the “friendly” Iraqis.

After all was said and done, no one was injured, but we sure were in the wrong place at the right time! 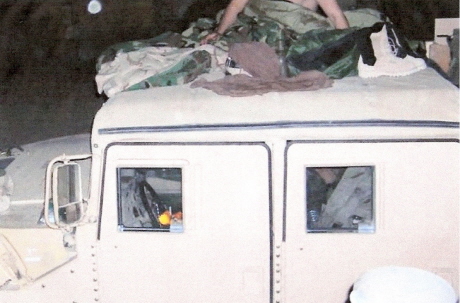 Humvee with armored doors and soft top. Looking closely, it looks like a trooper is bunking on top of the Humvee!