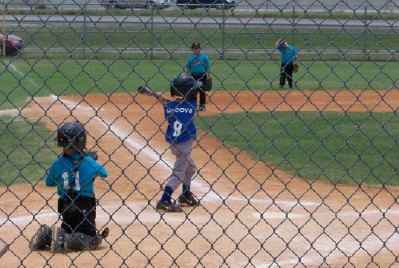 This past Saturday, Layla and I took a traffic filled drive to San Marcos, south of Austin, to see one of our Grandson’s, Sean Bryan, play baseball. He did quite well for a 7 year old, playing in an 8 year old, league! His team won 8-2, finished second in their league and he had 2 hits, scored a run and drove one in!

Here’s Sean getting his first hit and later scoring. Sean’s parents are Randy and Debbie Bryan and Randy is a Baptist Pastor in San Marcos. Randy is a very good ball player, and not before too long, will be playing Senior Softball, too!

Back to the traffic, it was horrible! You’d think with gas almost $4.00 a gallon, somebody might be staying home! Maybe everyone was out for one last trip?