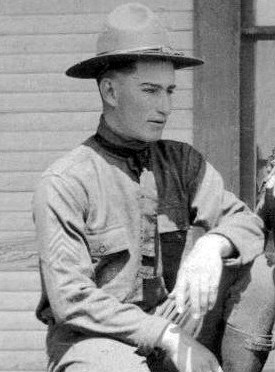 On February 12, 2007, I was going through a trove of old Bryan family momentoes and opening a box of keepsakes from my Uncle, E. Jay Bryan, who served in the Army during the Mexican Border Campaign with Gen. Pershing, and died in France during WW 1, well before I was born, I came across the following handwritten poem, author unknown to me.

It is my pleasure to share it with the readers.

E. Jay’s unit was Company F, 3rd Texas Infantry Regiment, Texas National Guard, from Falls County, Texas, charged with border defense. His Grandfather B. M. Bryan, my Great Grandfather, also defended along the Mexican border during the Mexican War of 1846/47 as part of a Texas Ranger contingent, Bell’s Rangers, also from central Texas. Today, our southern border still remains a real problem area. In my forefather’s times they just closed the border and ran the Mexicans back across.

Things were easier then before we became engulfed with Political Correctness and the disgusting pandering of our politicians. But, one thing remains, our country’s freedom is more important than politics!

Just like today, most of us, and definitely our military, loves this great country and remain proud to serve her!

“TOO PROUD TO LOAF”

We’re camping on the Rio Grande with nothing much to do,
But wash our shirts and darn our socks,
And darn the insects too.
We want the world to understand we’re not too proud to fight,
But draw the line at loafing here with things that sting and bite.

The Rattlers are a friendly lot and visit us by scores,
Tarantulas prefer our tents to sleeping out of doors.

In napping in our shoes and hats the scorpion persists,

We’ve learned the Horned Toad is a harmless little oaf,
We’re not a bit too proud to fight, but how we hate to loaf.”