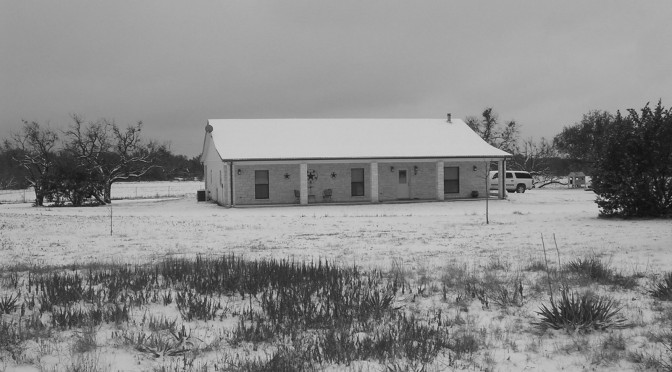 Getting up at 5:00 AM and slipping on my workout clothes, I opened the side door of my house, in the Texas Hill Country, southwest of Goldthwaite, Texas, and was preparing to go outside and get into my truck for the ten-minute drive to the gym, when the “glare” hit me. Not so much the glare but the complete whiteness of the early morning. The TV weather had reported a Winter Storm Warning, but so many of their warnings fizzle out I had not mentally prepared myself for snow on the ground and snow piling out of the sky. Flipping on the TV, sure enough, they reported it was snowing in their north and northwest viewing area. So much for a workout.

It kept snowing for well into the morning and everything was white! I did notice that my newly planted Garlic was bravely sticking barely above the snow. Wow! We must have at least four inches and counting. The field behind our house looked like a bowl of whipped egg whites, and a crazy thought popped into my mind, if we get two or three more inches I could get out my skis and ski down the county road or take a leisurely swing down my field. That would make a good picture.

Growing up in Houston, and living most of my life there, we would see snow, maybe once every ten or fifteen years. We have hunted Quail in the snow in Arizona, sledded down the hills in Georgia and pounded the slopes, skiing, in New Mexico, Colorado and Utah, but having all of this snow on the ground and falling out of the sky on my place was more than exciting.

After breakfast we, my wife and our wonder dog, Spike, headed out to my truck, cleaned the snow off of the windshield, put it in four-wheel high and “plowed” out onto our place.

The first stop was a water trough, frozen (I broke up the ice), framed by snow and on down the road, where we both noticed how pretty the snow was on the prickly pear cactus. We couldn’t resist a picture.

Spike was bouncing up and down wanting to get out into the snow. Being a miniature Dachshund, he only has three or four inches of ground clearance, but out he went, nose to the ground. No game was moving but he was hunting. My wife was worried, that with his short hair, he would get cold, poor baby.

We checked on a deer feeder and there were signs of activity early in the morning, but the tracks were almost snowed out. Driving on, we noticed deer tracks crossing the road. Stopping and letting Spike out, he quickly found the trail and the “hunt” was on. He hunted for several hundred yards, me following. Spike is short, no more that ten inches tall. I am six feet tall. Spike runs under the brush and trees while I plow through the snow and brush covered with snow. Not even having a gun and having enough of this fun, I call off the “hunt”, pick Spike up and head back toward the truck. The little dog had been in “hog heaven” hunting in the snow.

The snow had stopped by the time we got back to the house and we shed our wet jackets. Looking out over our place and thinking how great this moisture would be for the land, how sloppy it would be for a couple of days and how dirty our vehicles would be, helped us to appreciate the warm, cozy house and the fire glowing in the cast iron heater.

Spike wanted to get back to hunting!