As my Grandchildren approach hunting age and prove proficient in shooting and handling a rifle, they are all ready for Poppy to take them hunting on the ranch.

Rebekah, a 10 year old and one of my 3 Granddaughters, announced this week that she was ready to go hunting with me and I told her that this was one of the nicest birthday presents I had ever received. My birthday was the day before. She was to start practice with her Dad’s .243 this past weekend, but the wind, rain and cold put a halt to that.

Even though she couldn’t shoot a Deer, she was ready to go out, so Friday, November 23, was the day we picked. The temperature was 34 degrees and there was a heavy overcast. All of this weather was the forerunner of a fierce winter storm heading our way from New Mexico. North of us, along I-20, around Abilene, winter storm warnings were posted for the weekend and our part of this system was rain and maybe, light snow flurries.

Rebekah and I established the rules for the mornings hunt; this was to be a fun thing and for her to let me know if she got cold, I would shoot a spike, a big doe, or, of course, a nice buck, so sunrise found us in “The Scaffold Blind”.

This was the same blind that her Dad, my Son, Randy, had shot a nice 11 pointer 10 days earlier. 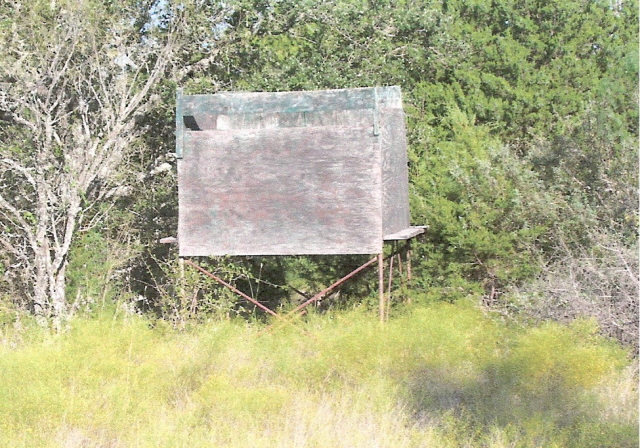 This is a picture of Randy’s nice, 11 pointer. Also pictured is Randy’s son, my Grandson, Sean and Spike, the Deer tracker. 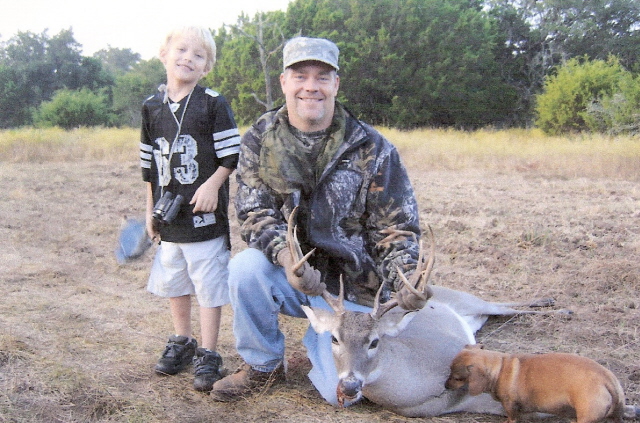 At 6:50 AM, she spotted two yearlings coming in to the feeder. Soon, this was followed by a steady trickle of young does and their yearlings, and none of the does showed any signs of being in estrus. For the first few Deer, Rebekah would point at my gun for me to shoot, but I would make a “too small” sign for her and she quickly figured out the sizing requirements.

This is one of the many small Deer we saw on our hunt. The lighting is horrible, but the Deer, center/right is rooting around the remnants of a salt block. 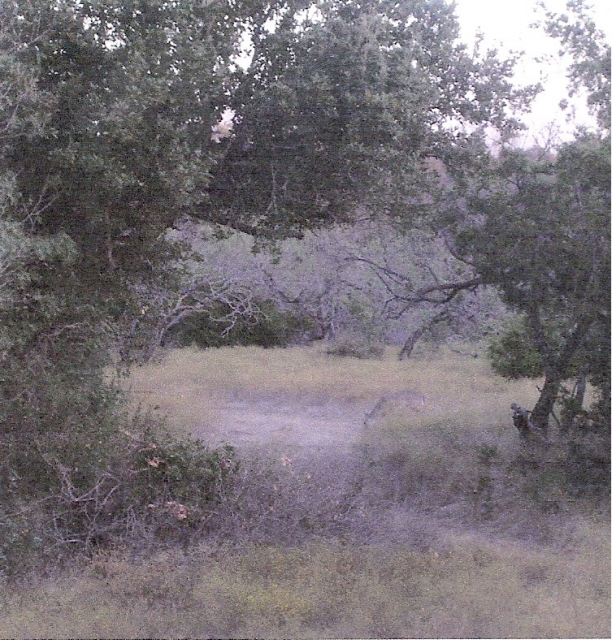 At about a count of 10 Deer, Rebekah’s hands had become very cold. Before heading out, I had put 2 pair of gloves on her, cotton next to her skin and wool over them, she had a blanket, and everything else was fine except for her hands. Taking off my wool gloves, I put them over her hands and we kept counting, or hunting.

Finally, the count stopped at 13, we hadn’t seen any horns, but she said, “Poppy, I’m ready to go back. My hands are cold!” We climbed out of the blind and got her back to the old ranch house and a warm stove. After a quick hand warming she went right back out into the cold to play with the rest of her Cousins and her cold hands were quickly forgotten.

She will never forget seeing so many Deer on her first hunt, and best of all, we practiced restraint and not seeing any “shooter”, passed on 13 Deer. She’ll remember that too!

As she was running outside, she said to me, “Poppy, are your gloves different colors so you can remember which hands they belong on?”