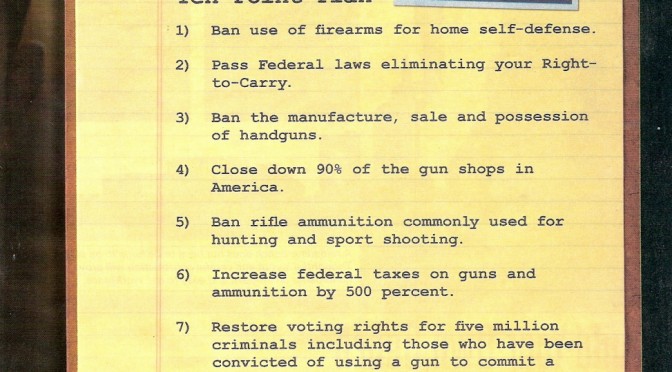 Generally, this is not a political blog, but sometimes a person has ‘to take the bit in their teeth’ and speak out for what they believe in and I really believe the following.

Being a Life Member of the National Rifle Association, I recently received their September, 2008, issue of ‘The American Rifleman’ and perused with interest their story on pages 40 and 41, “Barack Obama’s Ten Point Plan to ‘Change’ The Second Amendment”. Having scanned in his Ten Point Plan, I want share it with everyone: 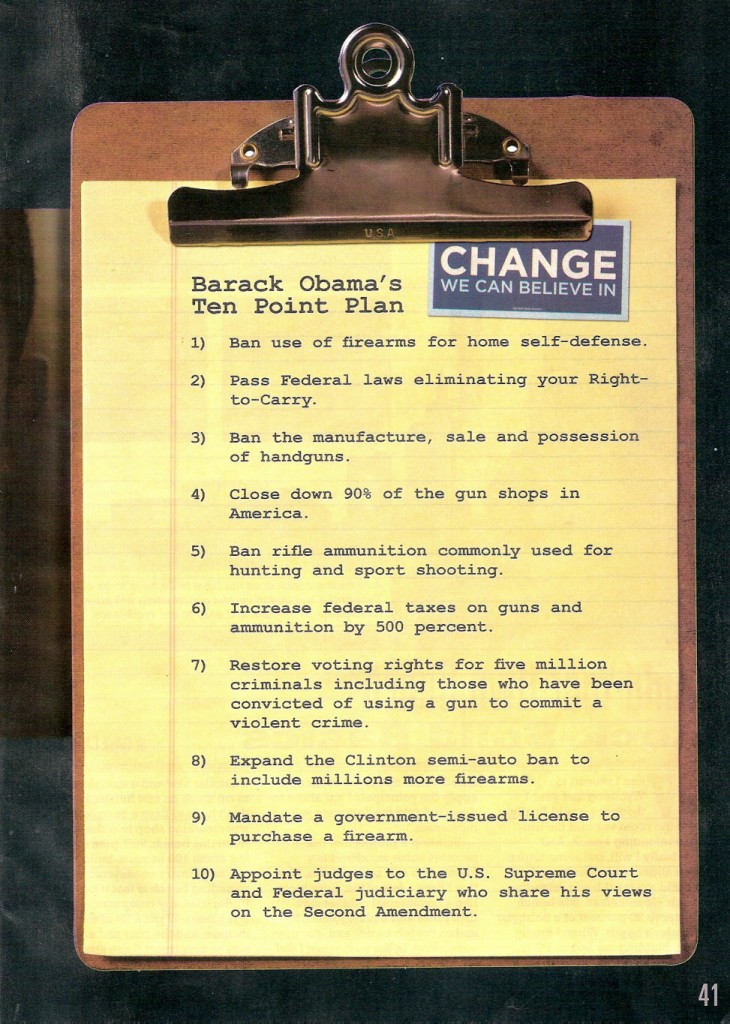 When it comes to politics, I am definitely not a ‘one issue’ person; and I believe in low taxes, the use of all of our own natural resources, smaller government local, state and federal, the rights of the unborn, strict judicial interpretation of our Constitution and my individual right to keep and bear arms. Most important, I believe in God and love Jesus!

I also love and respect our Constitution and have sworn to uphold it! It is a wonderful, insightful document, written by far sighted, intelligent men. It doesn’t ‘live’, but it does clearly state our rights as citizens and, to me, near the top, is our right to keep and bear arms! The Second Amendment reads:

“A well regulated Militia, being necessary to the security of a free State, the right of the people to keep and bear Arms, shall not be infringed.”
As our Presidential election nears, I believe that hunters, shooters, gun owners and their supporters must band together and prevent Barack Obama and the rest of the liberal democrats from gaining control of our government!

What are some of the things that we can do to push our agenda to the front? Here is my 10 Point Plan To Save Our Gun Rights:

1. If not a member already, join the National Rifle Association.

2. Encourage friends and supporters of the shooting sports to do likewise.

3. Contact your local, state and federal representatives to support firearms,

4. Vote only for representatives that share and support your views on this subject.

6. Don’t hesitate to speak out!

7. Get involved in shooting sports.

8. Get your family involved in the shooting sports.

9. Get involved in local, state and national politics.

10. Keep the pressure on our elected officials to preserve the Second amendment!

All of these things have to start at the grass roots level! Get involved and, as we say in Texas, “Git’ ‘er done!”