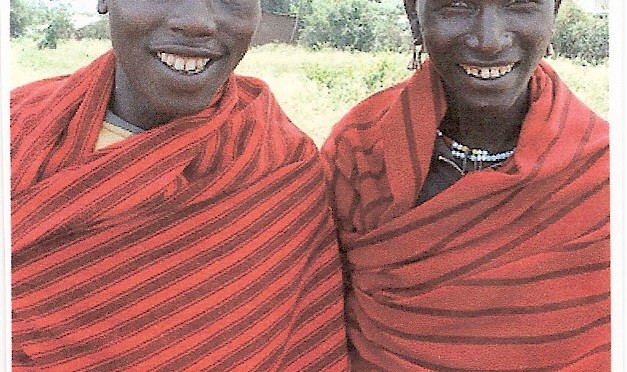 My youngest son, Randy, was the “star” of “Buck Fever”, when he was a 12 year old beginner at Deer hunting. He is and expert at that sport now and an expert in finding and saving lost souls. Randy is presently the Pastor of The Fellowship Of San Marcos, Baptist Church, in San Marcos, Texas.

Last year he was called to go on a missionary trip to western Kenya, in east Africa, to spread the Lord’s word. Western Kenya is currently locked in an ongoing spiritual battle.

Two Massai warriors are pictured and he related the very unusual meeting he had with them. These two warriors were fiercely angry with Randy because they thought he had lied to them and the Lord gave Randy the courage to stand up to them and correct the misunderstanding. After their “tiff”, the two warriors, village head men and locals all became “best” friends!
After his safe return he penned the following thank you letter to his supporters:

Kenya was such an incredible experience! First, about the power of prayer. I want to thank everyone for theirs. I knew God was with me and our team of 28 people before we even left the States. Once we arrived in Kenya, we saw Him move in ways we could not even imagine and we couldn’t have done any of this without your prayers and financial support. Read on and you will see why this trip was so amazing and why all of the prayers, time, and money that went into it were worthwhile. By the time we finished up in Kenya over 8500 Kenyans had accepted Jesus Christ as their personal Savior!

THE SCHOOLS: We shared the Gospel (‘Injilay’ in Swahili) with about 15,000 students. We went to the school campuses with the
Child Evangelism Fellowship of Kenya (CEF). They have a relationship with all of the schools there. They also ask the kids that accept Jesus to fill out a card so CEF can start Bible clubs on the campuses. By the time we left Kisumu, CEF had received 7337 cards back from students indicating that they had trusted Christ for the first time! CEF will help them grow spiritually and encourage them to get involved in their church, or find one if they do not have one.

THE TRAILS: Almost everyday, we hit the trails and went hut-to-hut sharing the Gospel. Sometimes, we just stood out on the trails and talked to people as they walked up. Almost every person we shared the Gospel with received it with joy and accepted Christ. They expressed much gratitude for the Good News that we brought. Many thanked us with tears in their eyes. I have been a Christian (for real) since I was about 20 years old. I have seen God do many great things but I, truly, never thought I would see so many people turn to Christ in such a short time. I never though I would see something like Acts 2:41: “Those who accepted his message were baptized, and about three thousand were added to their number that day.” What I heard from the pastors we worked with was that all of East Africa is like that. After years of oppression and emptiness, so many people are hungry for God and just need someone to tell them the Gospel! It is exciting and humbling at the same time.

MAASAI
WARRIORS: We were waiting along a trail and up walked two Maasai Warriors, both surly and uncommunicative. We began telling them about Jesus and they changed dramatically, even letting us take their picture.

THE FIRST SERVICE: Most of our work sharing the Gospel was to start a brand new church in Kisumu called the Kasule (kah-soo-lay) Community Bible Church. The new pastor, Pastor Samson, had been trained over the past two years to lead this new church. He was completely overwhelmed with what happened at the first service that turned out to be a great place for any man or woman of God to be part of at that particular time. When we were out on the trails, we wrote down the names and addresses of each person who accepted Christ. On Sunday, at the first church service, we gave this list of over 1100 people to Pastor Samson! We called it his “Church Directory.” It was awesome! There were about 400 people at that first service! Including about 10 or12 Maasai warriors!

There are two other amazing stories that I want you to know about.

One involves how so many Maasai came to the first service. The Maasai are a brave and proud people and other Africans are terrified of them. They usually are resistant to the Gospel, but God opened the door for us and many of them accepted Christ! It is an amazing story. Our church in San Marcos, Texas, may adopt them as a people group to take them the “Injilay.”

The other story is when two thieves stole a camera from us. The ENTIRE village that was present chased them down, dragged them back to the church, and wanted to kill them at the church for stealing from us. The pastors were able to convince them not to do it. Both thieves later accepted Christ.!So did their parents and the guards who were later assigned to the church. It was an amazing story.

God bless each of you for your prayers and monetary support. God called on you to help and we couldn’t have done it without you. Please pray for God to continue to work in East Africa and around the world. Also, please pray for our church, The Fellowship Of San Marcos, as we plan more trips to spread the gospel of Jesus Christ.