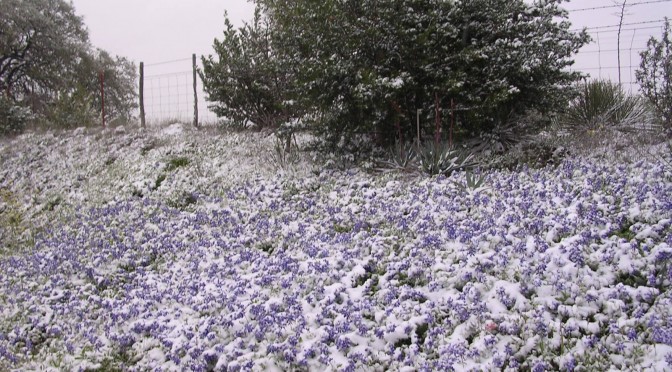 On Wednesday, April 4, the weather forecast was for a front to come in on Friday, with a low temperature in the 40’s. Thursdays forecast for Saturday was for a low of 35°, which changed on Friday to a low of 33° in Waco, with freezing temperatures in the rural areas and a chance of sleet and possibly snow in northwest, Central Texas. By Saturday this possibility became a reality!

Saturday morning, during breakfast, I looked outside and noticed sleet/snow falling. At the time I thought, snow, neat! Layla and I had to go to Copperas Cove for a Grandson’s 18th birthday party and, all the way over, sleet/snow was still falling with some sticking under the trees and on plowed ground. No big deal!

We arrived at ‘Cove at 2:15 PM and by 2:30 PM the sky was falling on us. Huge flakes, the size of silver dollars, were floating down. The festivities ended around 5:00 PM, huge flakes still falling, snow everywhere, as we headed for Goldthwaite.

It snowed on us all the way back through Lampassas and Lometa, the flakes just smaller, but a lot of snow on the ground. Getting home around 6:30 PM, it was still snowing and we decided to go out and get some pictures. The Bluebonnets, that I had never seen covered with snow, were beautiful, but the Indian Paint Brushes were bowed down with the white stuff and couldn’t be seen. I think Cactus and snow are very unusual! 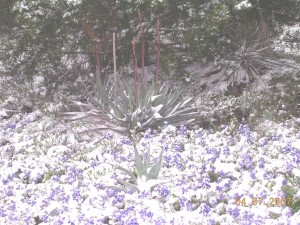 Overall, at our house, we had within a half inch of the January, 2007 snow, but all of this was the day before Easter. It ran through my head, “I’m Dreaming Of A White Easter”. Wool slacks will be the order for Church tomorrow. How crazy this is!

My son, Brad, who lives in ‘Cove, lost an entire limb off of a five year old, peach tree, with hundreds of tiny peaches on it, because of the weight of the snow! And, to top it all off, this morning, I heard a noted weatherman say, “I would never had forecasted this much snow on Easter.”

So much for “Global Warming”.