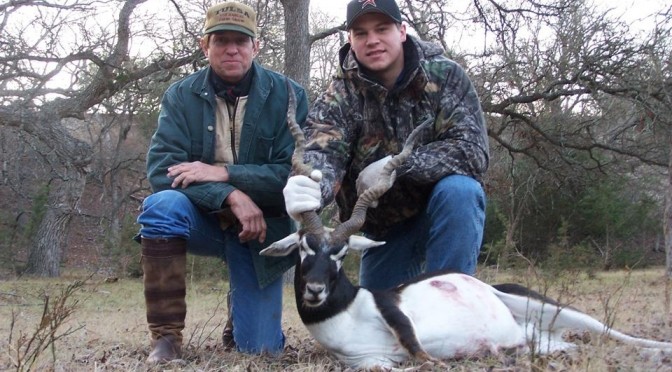 The following story was written by one of my friends, Warren Blesh, owner of RRR Feeds in Goldthwaite and RRR Ranch, here in Mills County. He is also a Director of The Texas Wildlife Association.

Fourth Quarter And No Time Remaining

Wow, earlier this month Doris told me “World Famous Horseman” Craig Cameron was on the phone. Craig wanted to bring his son Cole “Linebacker for Arizona Wildcats” hunting when he came home from college for his present. Well, I told Dori, this hunt will be tougher than most. We should have Craig and Cole come next year. She would have nothing to do with that and said, “they are coming and you find them a blackbuck or nice whitetail”.

So, the story begins. Our first morning “first quarter” on the RRR was like most others this time of year. We saw quite a few does early in the morning and a 3 /12 year old buck and action slowed rather quickly as the winter day heated up to short sleeve weather. So, with some reservations, we took a jeep ride and spooked some blackbucks traveling up the mountain and jumped a few more whitetails. That afternoon “second quarter” we tried a drive and sure saw some great animals, but no good shots.

With one morning “third quarter” to go we decided to walk to the blind that morning. We figured the action would be better with a real quiet approach. Action started slow but around 9:00 a monster 8 point buck gave us a real thrill with his brief walk by us that led to what proved to a too tough shot for Cole. Still enthused Craig and Cole suggested I leave them in a different blind the rest of the day. I was to join up with them later.

So, about 3:00 we began the “fourth quarter” of play. I say this because Cole understands football and it is not over till the timer goes off. Around 5:00 we saw whitetail does and a few young bucks. Then, 5:30 came and still no blackbucks. At 5:45 I told Cole the best is yet to come. We were down by 3 with 1 minute on the clock.

At 5:50 a monster trophy blackbuck showed his head coming our way. Cole was pumped after waiting two days for this moment. “Oh no”, I said, he is turning and heading down that ravine. Craig told Cole, take the shot! Cole using my 25.06 put a good one on him at 225 yards. We tracked the antelope into the dark of the night only giving up around 8:00 PM till sunrise. Cole was ready for overtime the next morning.
Craig & Cole Cameron

Morning arrived early as we all could not wait to search for the big trophy. We started in the river bottom and quickly Cole spotted his trophy just down a ways in the pecan bottom.

Excitement flowed as we took photos and headed for the taxidermist. Cole, with no time on the clock had taken his first trophy blackbuck and won in overtime.