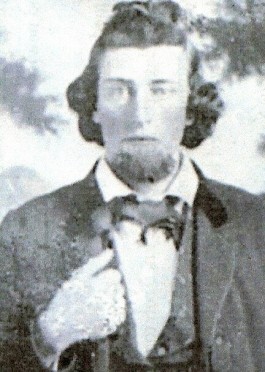 Having visited this battle field and walked over the ground my Great Grandfather (Paternal), Brinson Bryan, fought over. I was astonished that so many men could fight over so small an area for 2 days and on the second day, a charge and break through, still influence the outcome of the fight. They were tough guys!
Brinson, pictured around 1850, had come to Texas in 1846, joined the Texas Rangers, and had fought in the Mexican War with Bell’s Rangers, part of Zachary Taylor’s Army.

In the spring of 1862, he was visiting his Grandmother, just outside of Mobile and “joined up” with an Alabama, sharpshooter, Regiment, the 40th, and was later attached to Ector’s Brigade. He was back with his Texas boys!

With Ector’s Brigade, made up of Texas infantry units, Brinson’s portion of the 40th Alabama, took part in the Battle of Chickamauga, September 19 and 20. It was the largest, and the bloodiest, 2 day, battle, of the War, and was a resounding Southern victory. On both sides, over 34,000 men were killed, wounded or captured! Strange, but Chickamauga is an Indian word that means “River Of Blood”!

During the opening of this battle, Ector’s Brigade was sent to reinforce Confederate General Nathan Bedford Forrest, who’s units were fighting on the extreme right flank of the Southern line. This would be the first, and not the last, time Brinson would “Ride With Forrest” and through the heavy fighting of the entire 2 day battle, the Brigade held, prohibiting the Yankees from sending reinforcements to the main part of the fight that was raging less than one mile away, an important bridge, Reed’s Bridge, over Chickamauga Creek.

Still on the extreme right flank of the Confederate lines, on the second day of the fight, Ector’s Brigade charged and broke through the Union lines, causing the Union commander, Gen. Rosecrans, to withdraw a Division from his left to reinforce the break. At that opportune time, General Longstreet, with his Corps, just arriving by rail, from Virginia, smashed into the gap in the Union line, and the chase was on, all the way back to Chattanooga!

After the battle, General Forrest said, “When the Texans charged at Chickamauga it excited my admiration!” I bet it did!