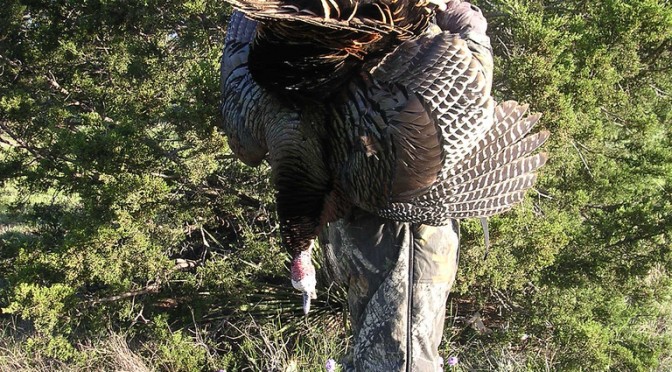 Deciding to retire on May 1, 2005, to my ranch in Goldthwaite, Texas, had not been the difficult decision that I had expected. My son, Brad, had returned from his tour in Iraq and was looking forward to a safer tour of duty in Colorado. Months before my retirement I even planted some peach trees and I had just put in my garden, one of my “gifts” being a very green thumb!

In 2005, spring Turkey season opened on April 2, and not having the time in the past to indulge in this spring sport on my ranch, and since I was retiring on May 1, and especially, since my ranch lies in the middle of some fine Turkey country, I decided that I would try to get me one.

The alarm went off at 6:00 AM and up I jump, pull up my Wranglers, slip on some socks and my work boots, and tucking in my camo tee shirt, head out to my jeep. I wanted to get a good “start” on the Turkeys. I stepped out of our side door and, whoa, where am I? It is freezing and I go back and look at our inside/outside thermometer and see it is thirty-two degrees. It was in the mid sixties when we went to bed last night and the evening weather report did not include freezing temperatures.

Quickly my plans change. If it hasn’t already, I know there will be a frost and my peach trees and tomatoes are blooming. Covering them up is out of the question, so the only thing left is to water them and hope that the water will freeze over the blooms and prevent them from freezing.

Out of my work boots and on with my insulated boots and quickly putting on my insulated overalls I head out to the garden and apply a liberal dose of water to the peach trees and tomato plants. I will know soon if this works. Now on to the Turkeys, dawn is breaking crisp and clear, and I’m behind schedule.

After my hunt, I laughingly say I pulled a “Randy” and drove and parked the Jeep directly under the elevated blind. Randy, my son, has been known to do just this when he’s late to a hunt. Getting out of the Jeep, I sling my rifle a Ruger, Model 77, .22 caliber, magnum, with a 3 X 9 power, Weaver scope and climb up into the blind.

Laying the rifle down, I survey the blind. The windows are frosted and I can’t see out but I have disturbed two angry red wasps that found shelter from the cold in the blind. I open one window and out flies one of the wasps, while the other takes exception at my having disturbed him and attacks me. I parry his first attack with a handy seat cushion, then whack him a good one and down he goes, and “smush”, under foot he succumbs. Now hopefully, down to turkey hunting. I clean the frost off of the windows and open all of them to try and balance the temperature.

I sit down and load my rifle, thinking that no self-respecting Turkey would come within a mile of this blind with all the racket that I’ve made. Fifty yards in front of the blind is a food plot which I had just planted and some excess seeds were scattered about it, and to my surprise, out walks a Turkey hen and begins to make “hen sounds”, soft clucks, and starts picking up the seeds. I didn’t have a camera with me, but I have some great “mind pictures” of her.

She clucks and nibbles for almost fifteen minutes and I’m thinking to myself “I guess no tom is going to come along,” when the silence is broken by the loudest Gobble, Gobble, Gobble, Gobble, I have ever heard. There, right next to the Jeep is a beautiful, multi colored, tom Turkey, in full strut, his wing tips touching the ground, slowly moseying toward the hen.

Gobble, Gobble, Gobble, Gobble, as he walks and struts right up to her, and making a fatal mistake, he turns away from me, and my scope comes to rest right in the middle of his back and, Bam! He jumps about five feet, straight up, feathers fly, and he walks off, the hen following. I quickly ejected the spent cartridge and quickly loaded and ejected another round before I caught myself. Nerves had hit me. I didn’t get a second shot.

Closing the windows, I unloaded my rifle and climbed down out of the blind and stepped off forty yards to where the Turkey had been standing, then heading off in the direction he took, I found him down, in a creek bottom, forty yards from where he was hit.

Once back at our ranch house, Spike, our miniature Dachshund, posed for pictures with me and the Turkey. Spike, who tracks and finds deer when we shoot one, took possession of the bird and guarded it until I loaded it into my truck and headed to a taxidermist in Lampassas.

The first, spring Turkey shot on my ranch is displayed in a flying mount, on a wall in the great room of our ranch house. I did save the tomatoes, having a “bumper” crop, which lasted until Thanksgiving! But the peaches were a different story. Off of four trees, I only harvested twelve of them.