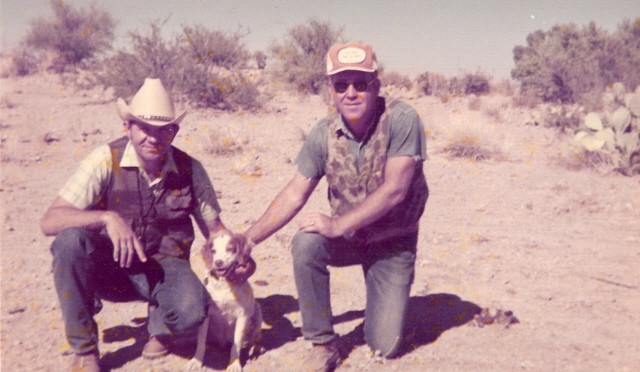 Jack, “Candy”, me and part of our limits of Gambel Quail, pose (remotely) along Tom Mix Wash, north of Tucson in Arizona.

With the temperature hovering near 90 degrees, Jack Shindler and I started the long walk back to our truck down Tom Mix Wash. The Dogs, Jack’s, Candy, and my, Rooster, were “Quailed” out and we were down to less than one canteen of water, out of the 4 we took along. Back then, mid November, 1973, the wash was rough country, now it is probably million dollar houses!

We had hiked, hunted and worked our way several miles up Tom Mix Wash, where, supposedly, the actor, Tom Mix, was killed in a one car wreck along a road that bisects it. Tom was killed prior to WWII and I barely remember it. Anyway, back then I was a Gene Autry guy.

Starting right after lunch we had headed east, towards the foothills and had bumped into numerous, large coveys of Gamble Quail and had considerably thinned out their population. That day we enjoyed some of the finest Dog work and shooting of all my Arizona hunts. We missed some, the Dogs busted a covey, a covey outran us, but within a little less than 2 hours we had 2 limits!

With our game bags full, 2 limits of birds, walking back to the truck Jack was excited, anticipating trying out his new camera with a “timed” shutter. He was going to set it up on a tripod, get it focused in, then we would rush around, smile and the picture, certainly a potential Pulitzer winner, would capture the “thrill of our hunt”!

Everything worked fine except that our hoard of Quail was cut off.