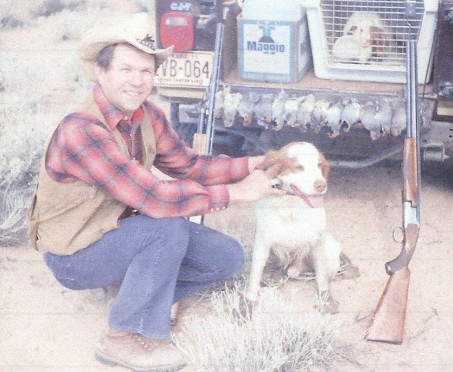 Thinking about Quail hunting, my thoughts jumped back to my stay in Arizona and the fabulous hunting I had encountered. One thing that made it so memorable was that, at the time, the season ran from Oct 1 to Feb. 28/29. Hearing in the past that you could get tired of hunting Quail and eating them, I tried and tried, but never did and most of my spare time was spent chasing these little “buzz bombs”.

My hunting partner, Jack Schindler and I had narrowed down, what we believed was, the best place in Arizona to hunt Gambel Quail and it was in the Tonto National Forest on the south side of the Tonto Basin, along the west side of the Salt River Canyon. This was our “Place” and it was an “easy” drive from our Paradise Valley homes.

“Our Place” was off of the main road from Payson to Roosevelt Dam and on to Globe, Arizona. Once on the Payson, Globe road, heading east, we would take a dirt road south for eight miles before it turned into a four wheel drive only road, following the west rim of the Salt River Canyon, for four more harrowing miles. When the four wheel drive road ended, we were there. We probably made many trips to the “Place” and never saw another soul there.

It began as a wash feeding into the Salt River and continued west up into the hills for several miles, turning into a mini canyon almost two hundred feet deep, with nicely terraced sides along the north rim. We, our dogs and hunters, would spread across the wash and head up it until the coveys of birds were found. The coveys were unbelievably, enormous, at the time, one hundred to two hundred birds.

Our second choice for “Best Gambel Spot” was on the north side of Tonto Basin on the slopes of Sombrero Peak. There were a lot of birds and easier hunting, but it was over a 2 hour, drive from our homes. Another drawback was in the late after noon, many shots were into the sun, limiting our effectiveness.

Jack, Ned Pepper, Rooster sleeping, display over a half of a 2 man limit of Gambel Quail. This was the results of a morning hunt near Sombrero Peak. Note, to protect from thorns, the “Boots” on Ned Pepper’s feet

All of these spots were on public land and there were many other excellent places to find a lot of Gambel Quail. Some of these were; Bumble Bee Creek east of Prescott, Thumb Butte west of Prescott, the low hills east of Camp Verde, and real close to home, the slopes of the McDowell Mountains.

None outshone “Our Place”