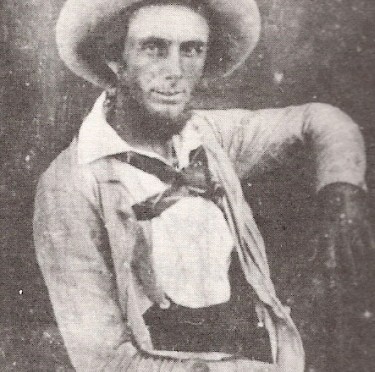 During the summer of 1848, my, 3G Uncle, Buck Barry, and some of his friends had an interesting swimming outing in the Trinity River. Earlier in the year Buck had sailed from Charleston, S.C. to Galveston, then bayou-boated up to Houston, where he hired teamsters to take him to Bazette bluff, on the Trinity River, east of the present town of Corsicana.

Buck Barry as a young man, probably near the time when he came to Texas.

Picking up Buck’s story from his diary, “Buck Barry, Texas Ranger And Frontiersman”, and condensing it a smidge, he and his friends had gone swimming in the Trinity when a man on the bank alerted them that an alligator was heading their way. Looking up river, steadily approaching us, we could only see the ‘gators eyes above water.

We “trolled” it on toward us, and then, the man on the bank shot the ‘gator. It floated for about a minute then sank in three feet of water. The bloody water and bubbles made us think he was dead, so we formed a line abreast and began searching for it with our feet. Soon, a stout young man, John O’Neil, stepped on the ‘gator and shouted, “Here he is! I’m standing on him. I’ll dive down and bring him up.”

John dived, but the ‘gator was very much alive and until the shore was reached, a lively fight ensued. First John was on top, then the ‘gator and we saw the shot had broken the ‘gator’s jaw and it couldn’t bite John, otherwise it would have drowned him.

The ‘gator then took full possession of the battlefield, swimming around in a circle, daring us to intrude on him again. Another shot took care of the gator and we knew it was fatal because the ‘gator sank without a struggle. We formed another line, found that it was dead, and brought it to shore.

Buck doesn’t say what they did with the ‘gator, but I’m sure it was eaten.

Today, the Trinity River is still “full” of ‘gators!