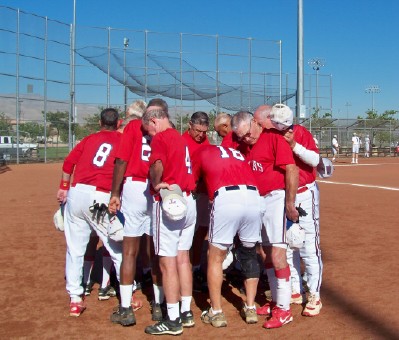 Having just returned yesterday from Las Vegas after participating in a national championship, Senior Softball, tournament, this past week has been a busy one for me. Luckily my Granddaughter, Sara and her Copperas Cove, Bulldawgs, had a week off so last Friday night I was in the stands to watch the Goldthwaite Eagles take on the Mason Punchers. Goldthwaite, ranked 19th in the State in Class 1A, entered the game with a 3-0 record while Mason, also class 1A, was 2-1.

Most high school games take around 2 hours to play, but at the end of this 3+ hour, marathon, Goldthwaite finally prevailed, 49-41. The game produced 2, 200 yard rushers, 2, kickoff returns of over 70 yards, 45 first downs, 854 yards total offense and 3 touchdowns scored in a 33 second period! For a complete summary of this record setting game, go to The Goldthwaite Eagle.

All of this happened to a Goldthwaite defense that, in their first 3 games, had allowed an average of 186 yards in total offense and only 6 points per game. With 11 minutes remaining, Goldthwaite held, what we thought then, was a safe 42-19 lead. In the last 11 minutes the Eagles scored once and Mason tallied 3 times. I believe the entire crowd was ‘sweatin’ as the game ended with a failed Mason on side, kick. Whew!

Early last Sunday I headed off to ‘Vegas to play softball and my team, The Texans, came up short and finished second in the tournament to a Nevada team. This team, ‘D99’, didn’t play against us in Dalton, Georgia and they told us they weren’t going to play in Phoenix. We had never heard of this team and didn’t know any of the players, so I guess we got what we deserved – we lost to an ‘outlaw’ team in a non sanctioned, ‘national championship’ tournament.

Here, The Texans are pictured in a pre-game, prayer.

The Texans are off until October 20th, when we play in the Senior Softball world Championships, in Phoenix. This week, on the road, State ranked 18, Goldthwaite takes on a tough, Class 2A foe, Merkel, while Copperas Cove celebrates home coming and hosts Killeen Ellison